An electric field can excite phosphorescent materials to glow; that’s the principle of electroluminescence. Since the mid-1970s, this cool form of illumination has back-lit flat panels for gauges and small displays, and in the 1990s a company called Elam found a way to create the same glow from bendable, shape able wire.

Electroluminescent wire, aka EL wire, soon became a favorite medium for creative electronics projects that light up at night. The wire’s flexibility and length let you draw and animate on a grand scale. Its durability withstands harsh treatment and environments. It stays cool and draws far less power than neon or rope lights or even LEDs. And its otherworldly color can lend its creations an almost hallucinatory look.

This page describes how EL wire works and how you can bend it to your will. EL wire consists of a copper conductor or core wire coated with a layer of electroluminescent phosphor material and wrapped with a coil or mesh of fine outer or wrap wires that’s thin enough to let light through. When you connect high-voltage, high-frequency AC power between the core and outer wires, the phosphor layer in between glows. Covering this coaxial sandwich are one or two vinyl sheaths that protect the outer wires and filter the light to create different colors.

EL wire comes in diameters ranging from superfine 0.9mm to 5mm, and also in non-round cross sections such as D-type for application to flat surfaces or T-type for stitching onto textiles. Other flavors include outdoor wire with UV protection, marine wire with greater water resistance, twin-core wire, high-brightness wire, and Lumiflex, an industrial-strength EL wire cable for robust, professional applications.

You typically run EL wire at 100V–120V AC, with a frequency between 400Hz–2,000Hz. Increasing the  frequency changes the aqua phospor’s glow color from green to blue, with a brightness peak at around 2,000Hz (cyan). Running EL wire at 3,000Hz will even turn it purple, although the glow is dim. At peak frequency, increasing the voltage will make the wire glow brighter, but also shorten its lifespan; EL wire slowly fades with use.

EL wire is shaped like other wires, but you don’t connect each end and run current through it. Instead, the two connections are made to the center conductor wire and the outer wrap wire at the same end. The far end of the EL wire is left unconnected. In component terms, a EL wire connects and behaves like a capacitor, with its capacitance proportional to its length. 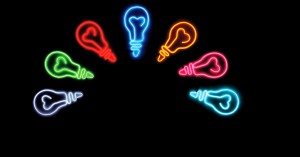 Most EL wire projects run on battery power, which lets you take them out at night. To convert the battery’s DC to high-voltage (but low-amperage) AC, you need a driver. A mini industry of inexpensive EL wire driver boxes has emerged, and these are what most people use; the boxes are small, cheap, and easy.

There’s currently a range of drivers, each designed to illuminate specific lengths of EL wire, from just 1′ on up to 330′ of a single strand, or several separate strands that total 330′. If the length to be illuminated exceeds the limit of a driver, a more powerful driver must be used.

You can also build your own driver to fine-tune the AC, giving you more control over the EL wire’s appearance. Figure B shows a simple EL wire driver and strobe circuit based on two 555 dual-timer chips (or one 556), a TIP120 Darlington transistor, and a small transformer. This circuit will power about 10′ of wire. The left side of the circuit, the driver, has a potentiometer knob that sets the AC frequency, which changes the wire’s brightness and color. The right side is a simple strobe that switches the wire on and off. As with other 555 flashers, connecting a pot to Pin 7 of the chip or a trim cap to Pin 2 will let you adjust the blink rate.

By lighting up multiple strands of EL wire in sequences or other patterns, you can create animations and other visual effects. You can also buy mini sequencers for EL wire that act like switchboards, taking the driver output and routing it to multiple channels in a series of patterns, like the way some Christmas tree light controllers operate. Fancier boxes, such as the CAT-09 sequencer have a driver built in and do tricks like letting you program and switch between multiple patterns.

For ultimate control, you can program a microcontroller to switch EL wires on and off, using triacs. The triac, a component that’s like a transistor or relay for AC, switches the AC between each microcontroller output pin and the EL wire strand it controls; the triac’s gate pin connects to the microcontroller, and its other 2 pins connect the EL wire to voltage or ground.