The rapid improvement of the white light efficacy achievable with light-emitting diodes (LEDs) opens up new opportunities in the general illumination market. An LED light source made of red, green, and blue LEDs (RGB LED) can provide the unique feature of color variability, allowing the user to select the desired color point of the lamp. The white light color accuracy required in the general illumination market is a challenge for LEDs.
The variation in lumen output and wavelength for nominally identical LEDs and the change in these parameters with temperature and time result in an unacceptably high variability in the color point of white light from RGB-LEDs. 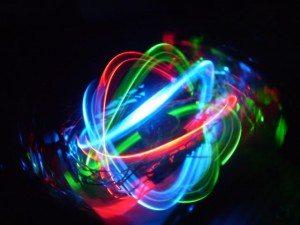 Mixing light by layering saturated colors on top of one another is something that most designers do regularly by using multiple fixtures in a lighting plot. However, additive color-mixing within a single luminaire is a new function, and it can be intimidating to many users. Consequently, confusing marketing hype abounds, and claims such as “full-spectrum light,” “16 million colors,” and “full-spectrum RGB mixing” can easily lead consumers to expect performance that most LED fixtures can’t deliver. While red, green and blue are the primary colors of light, using these colors for additive color mixing is far from adequate to achieve beautiful, functional lighting in many situations.

Red-Green-Blue or “RGB” color mixing frequently claims an ability to produce any desired color across the visible spectrum at any level of saturation. RGB mixing is by far the most common kind of color mixing used within conventional LED luminaires.

The term “primary color” is unreliable. So-called primary colors can only produce approximations of other hues when mixed together; they cannot produce exact replicas. Red, green and blue cannot, in fact, produce extremely saturated color at any hue except red, green and blue. Other colors mixed by RGB LED tend to appear washed-out or grayish, particularly in the amber-yellow, cyan-turquoise, and deep purple regions.

Grayed, washed-out color from RGB LED fixtures is a consequence of fundamental principles of additive mixing that limits RGB capabilities. It cannot be overcome by simply using better reds, greens and blues within an LED array. No RGB LEDs can ever truly be “full-spectrum” light sources, despite the catch-phrases and taglines frequently used in their promotion. A corollary to this can be seen in the printing industry. Look at the printing-plate registration marks on the edges of breakfast-cereal boxes or brightly printed fabric. There are often many more than three or four inks used in order to get really vibrant colors, sometimes as many as 10 to15 different inks on a single image. In this case, the color mixing is subtractive rather than additive, but it’s always true that more color on the input side equals better color on the output. Whether in print or in light, the same principles apply.

Some designers describe RGB LEDs as always having an electronic look to them – like the light from a video monitor – with none of the depth or richness of a tungsten lamp or saturated gel. It is sufficient when no other visual reference, such as light coming from a tungsten lamp with a filter, is available for comparison. When tungsten light is visible, RGB light sticks out, looking digital, fake and animated.

Imagine a color wheel with all of the colors around the perimeter: the most saturated color at the edges and the least saturated, whitest colors near the center. An RGB fixture’s output can be plotted by marking a spot at the circle’s edge for each point representing red, green and blue. Connecting these three points creates a triangle and the area within this triangle denotes the gamut or color capabilities of the RGB fixture.

It should be apparent that at locations within the triangle between the three RGB corners, the saturation of any given color is less than the red, green and blue points. For example, to achieve an amber color, mixing red and green together produces an amber-type light that is less saturated than pure amber light. This is reflected by the fact that the amber point on the line between the red corner and the green corner is some distance away from the edge of the color wheel. Plotting the gamut on a standardized color space like the CIE Chromaticity Diagram produces similar results. Deficiencies in the saturation of RGB LED colors are obvious when illuminating white surfaces. What is not readily apparent on a white wall is the odd behavior that RGB LED lighting can exhibit when illuminating colored objects and skin tones.