The word neon comes from the Greek “neos,” meaning “the new gas.” Neon gas was discovered in 1898 in London, but it was inventor Georges Claude, a French engineer and chemist, who first applied an electrical discharge to a sealed tube of neon gas to create a light. Georges Claude displayed the first of the neon lights to the public on December 11, 1910, in Paris. In 1923, Georges Claude introduced neon light signs to the United States, by selling two to a Packard car dealership. Neon lighting quickly became a popular fixture in outdoor advertising. Visible even in daylight, people would stop and stare at the first neon signs dubbed “liquid fire.”

Neon is a rare gaseous element present in the atmosphere to the extent of 1 part in 65,000 of air. It is obtained by liquefaction of air and separated from the other gases by fractional distillation. Hollow glass tubes used to make neon lamps come in 4, 5 and 8 ft lengths. To shape the tubes, the glass is heated by lit gas and forced air. Several compositions of glass are used depending on the country and supplier. What is called ‘Soft’ glass has compositions including lead glass, soda-lime glass, and barium glass. “Hard” glass in the borosilicate family is also used. Depending on the glass composition, the working range of glass is from 1600′ F to over 2200’F. The temperature of the air-gas flame depending on the fuel and ratio, is approximately 3000’F using propane gas.

The tubes are scored (partial cut) while cold with a file and then snapped apart while hot. Then the artisan creates the angle and curve combinations. When the tubing is finished, the tube most be processed. This process varies depending on country; the procedure is called “bombarding” in the US. The tube is partial evacuated of air. Next, it is short circuited with high voltage current until the tube reaches a temperature of 550 F. Then the tube is evacuated again until it reaches a vacuum of 10-3 torr. Argon or neon is back filled to a specific pressure depending on the diameter of the tube and sealed off. In the case of an argon-filled tube, additional steps are taken for the injection of mercury; typically, 10-40ul depending on tube length and climate it is to operate in.

Red is the color neon gas produces, neon gas glows with its characteristic red light even at atmospheric pressure. There are now more than 150 colors possible; almost every color other than red is produced using argon, mercury and phosphor. Neon tubes actually refer to all positive-column discharge lamps, regardless of the gas filling. The colors in order of discovery were blue (Mercury), white (Co2), gold (Helium), red (Neon), and then different colors from phosphor-coated tubes. The mercury spectrum is rich in ultraviolet light which in turn excites a phosphor coating on the inside of the tube to glow. Phosphors are available in most any pastel colors.

The initial color source is the inert gas which emits a characteristic color when electricity is applied. The two most common gases are neon which emits a fiery red, and a mixture of argon and minute particles of mercury which emits a subdued blue. Clear glass allows you to see the characteristic colors emitted by the gas. Fluorescent powders may be painted or baked to the inside walls of the glass tubing and the source light is then converted into a multitude of shades such as pink, turquoise, and green. By altering the mixture of elements, subtle differences are possible. For example, white is available in a wide array of color temperatures from warm to cool.

Tubing is also produced in colored glass. Deep clear reds, blues, and greens for example produce the richly saturated colors referred to as exotic or Euro glass. Colored glass may also have a fluorescent coating which can change both the quality and color of neon lights. 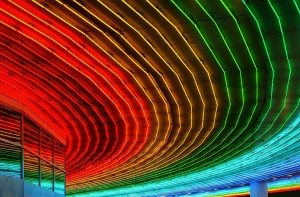 The glass is rotated and rocked (rocked and rolled) in burner flames which use a gas and air mixture to raise the flame temperature. Generally four burners are used. Crossfire and fishtail burners produce most angled bends and splices. Ribbon burners produce curves or sweeps. Hand torches are usually used for splices or tapering and tipping off electrodes.

Electrical current bombard the inert gas atoms with electrons knocking neon’s atoms out of their orbits. The electrons collide with other free electrons sending them back toward the atoms. As the electrons are absorbed into the atom, energy is given off as light.

An ultra high vacuum pump pulls the air out of the tube while a high voltage-high amperage transformer bombards and heats the remaining air to produce temperatures in excess of 500 degrees F. This allows the tube to achieve a higher degree of purity. When a very high vacuum is reached and the tube begins to cool, a small amount of inert gas is introduced from a flask or tank. The tubulation is then heated and as it is pulled it sucks in to make the tubes own seal.

Neon and argon gas by themselves are not dangerous. They are inert. As with standard fluorescent tubes, the minute droplets of mercury present in some colors are safe as long as the tube is not broken. Improper handling of neon lights can be a threat to both the environment and health. Many modern neon shops refuse repair of broken argon-mercury tubes for this reason.

Neon Lights are powered by voltages in the 2,000 to 15,000 volt range. Even though the current is in the milliamp range, if a neon piece is not properly mounted, wired, and insulated this voltage poses both a shock and fire hazard. This is an area where cheapness does not pay off. Well constructed neon lights should be problem free for many years.

For most applications (signs, designs, etc) neon is bent over a fire resistant pattern. Artistically expressive work is often freehand. Three dimensional work from engineer drawings or a dimensional template is very challenging but can be done.

Neon Lights can be used with three dimensional shapes such as a globe. Very interesting effects can be acheived because the light tends to fill the object with varied coloration and depending on the power supply, it can respond to touch. This is however an advanced technique.

The huge animated neon lights or “spectaculars” of the 1940s have multiple layers of neon each powered in a timed sequence to produce the desired effect. Many other forms of movement have been found in the neon tube itself. “Wiggle tubes”, “Crackle tubes”, “Jelly beans”, and “Whirlygigs” are a few.